D.W. Griffith – The Birth of a Nation

This is the “Souvenir” piece from W.D. Griffith’s The Birth of a Nation, the epic movie that changed the history of moviemaking and set a new course for film productions to come. The movie premiered on February 8, 1915, at Clune’s Auditorium in downtown Los Angeles. This is the “program” or “souvenir” that went with the movie. 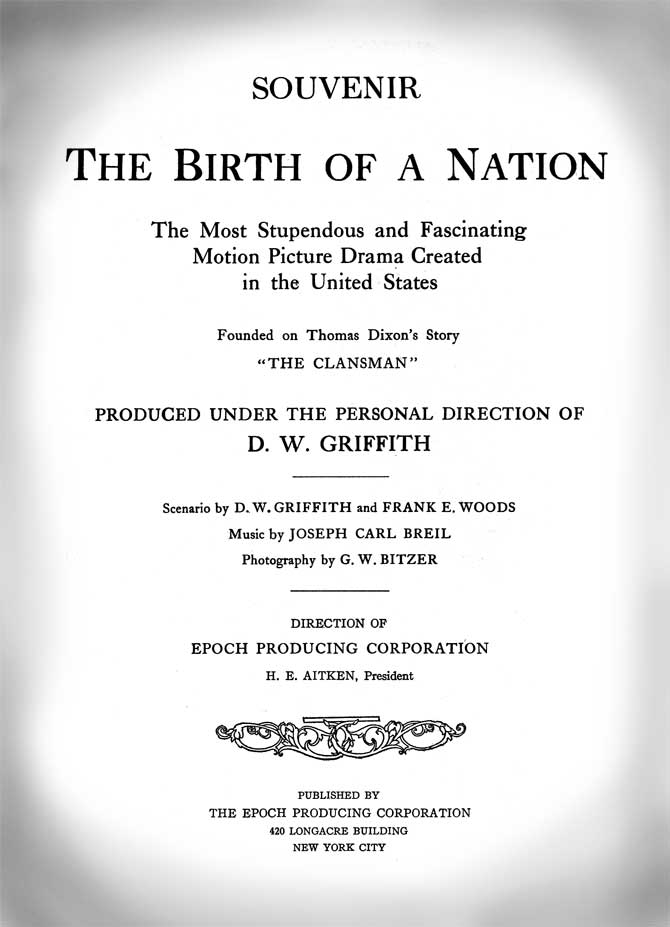 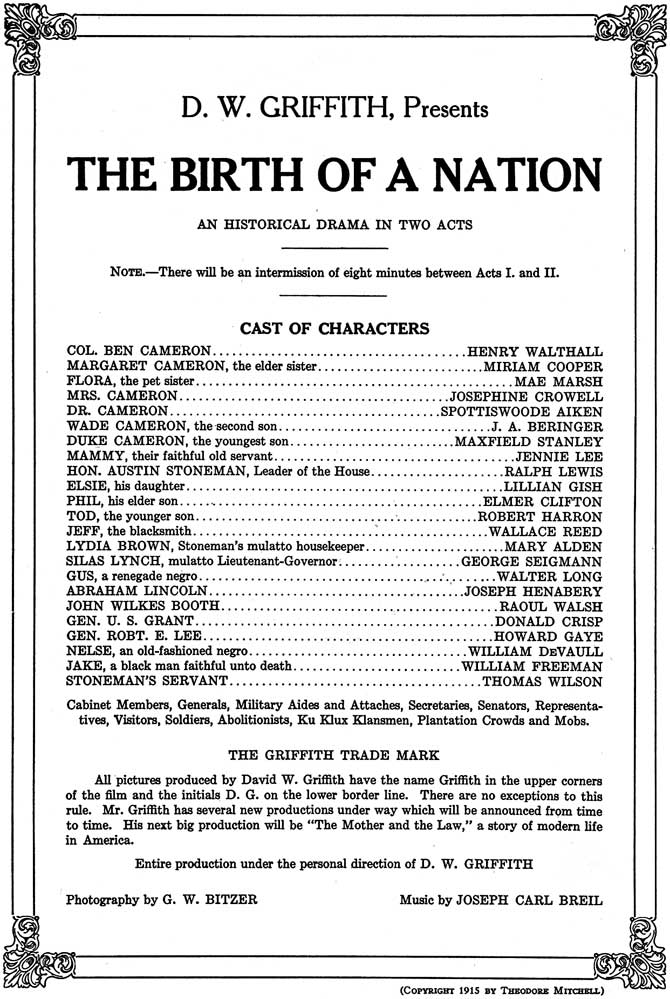 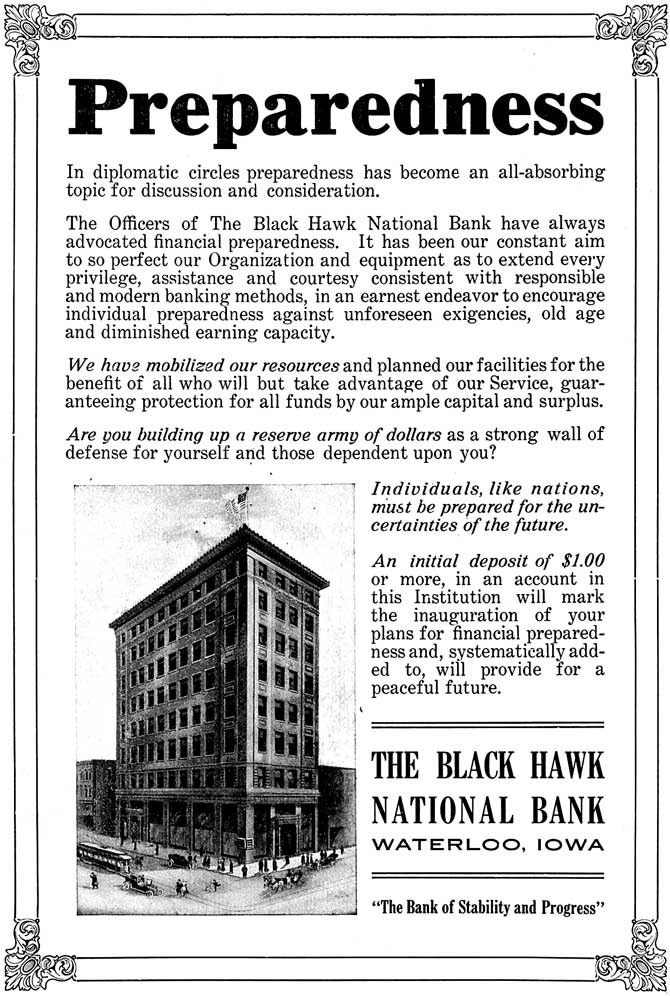 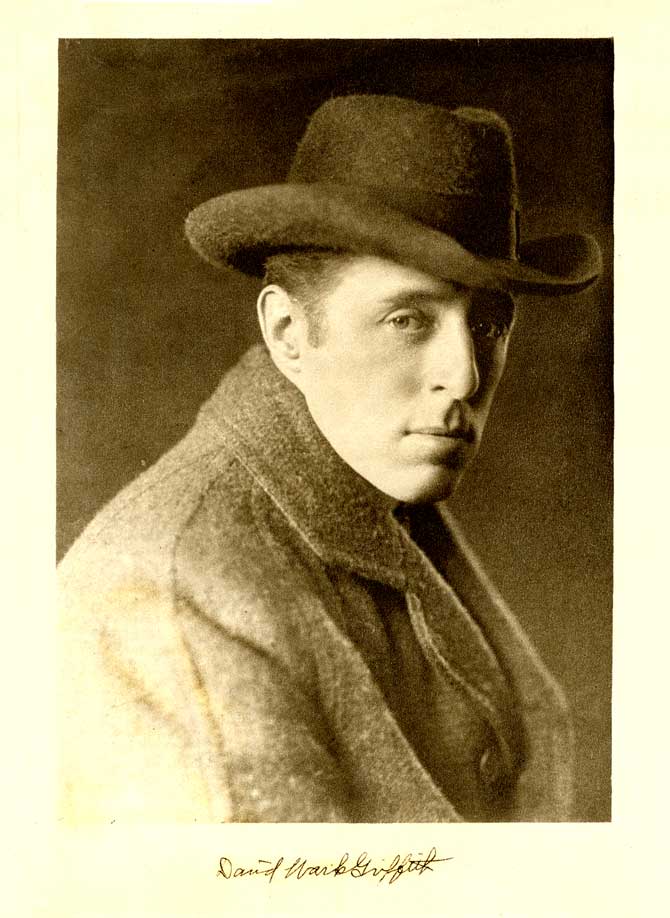 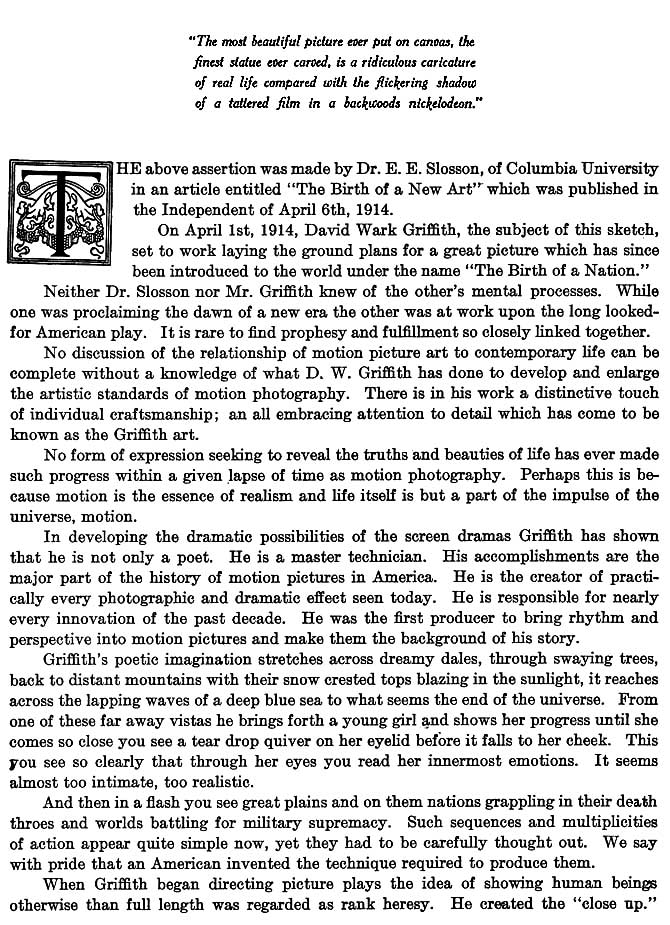 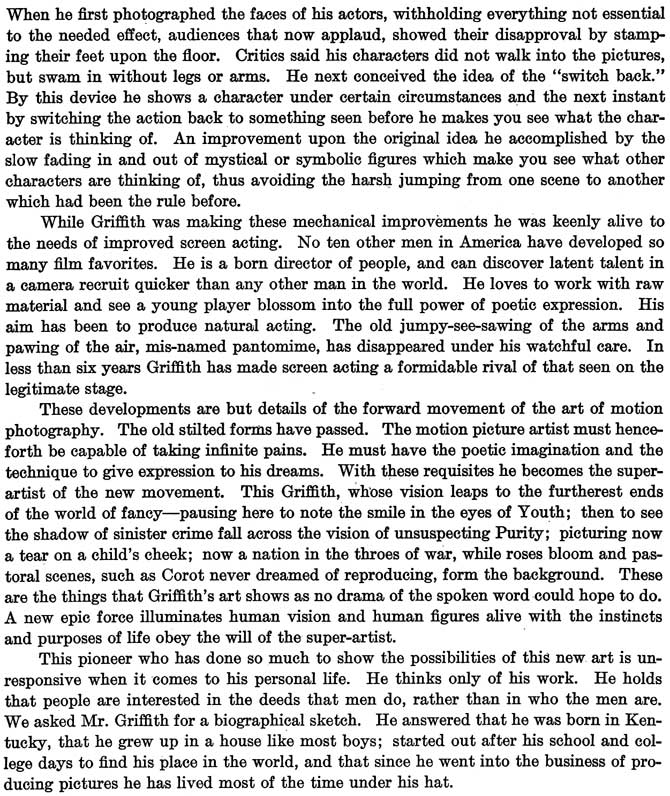 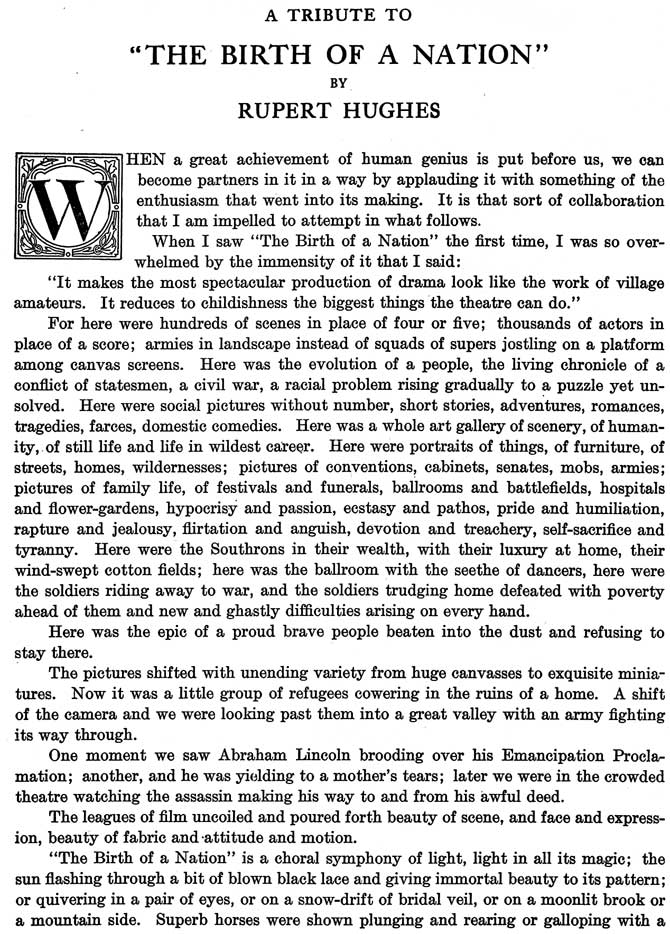 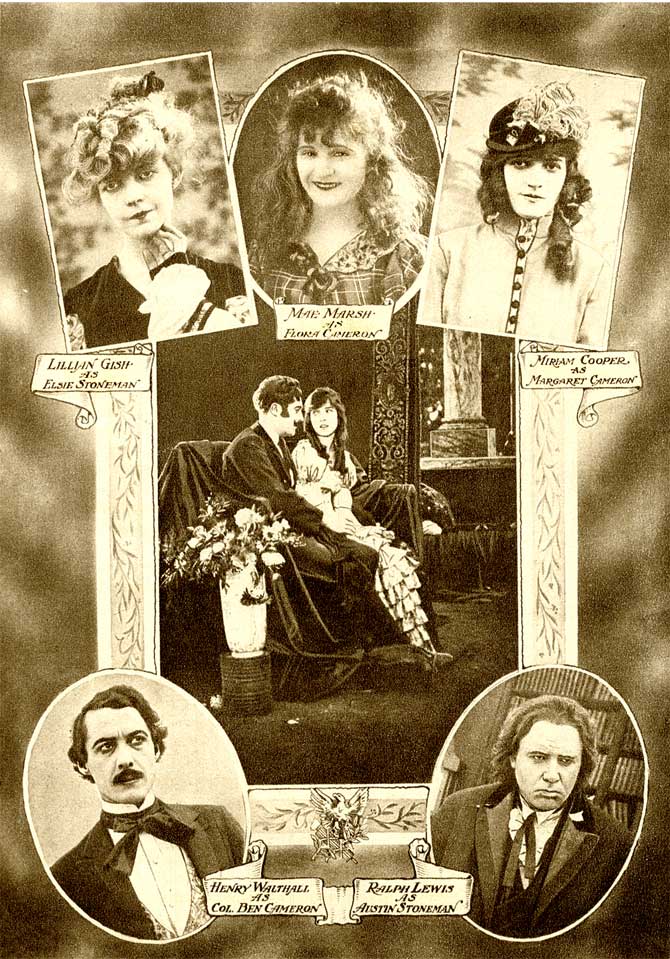 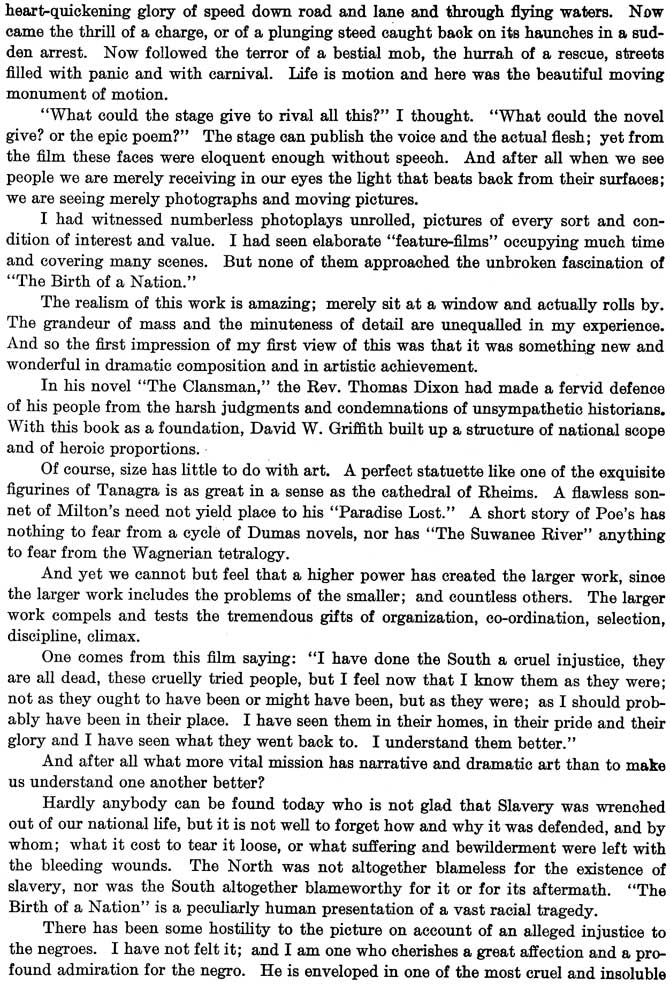 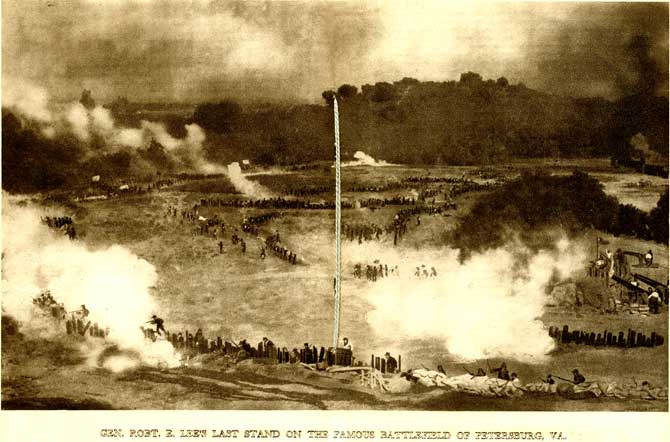 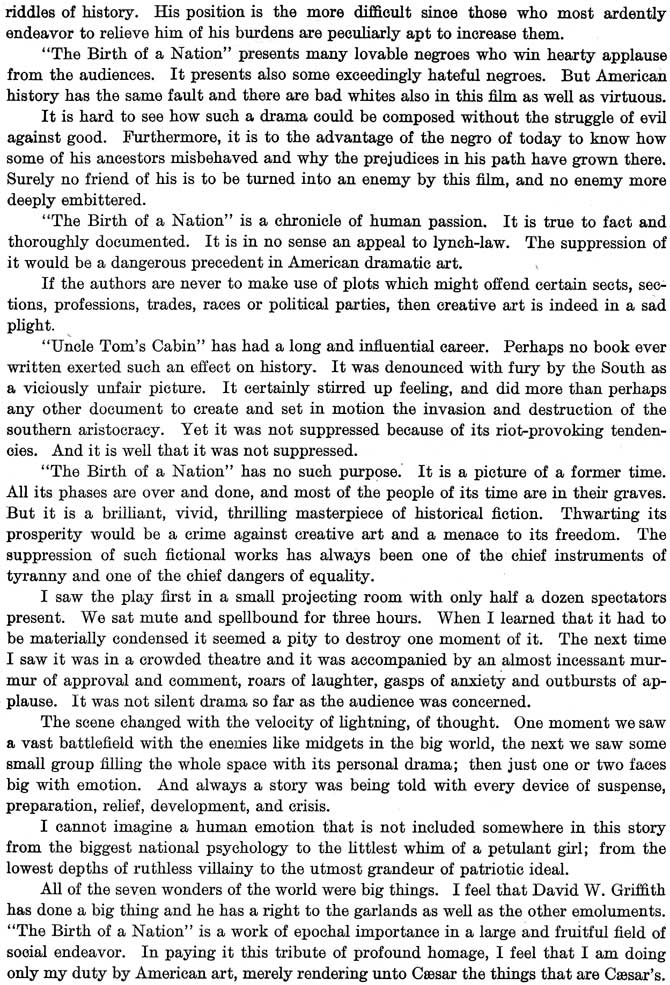 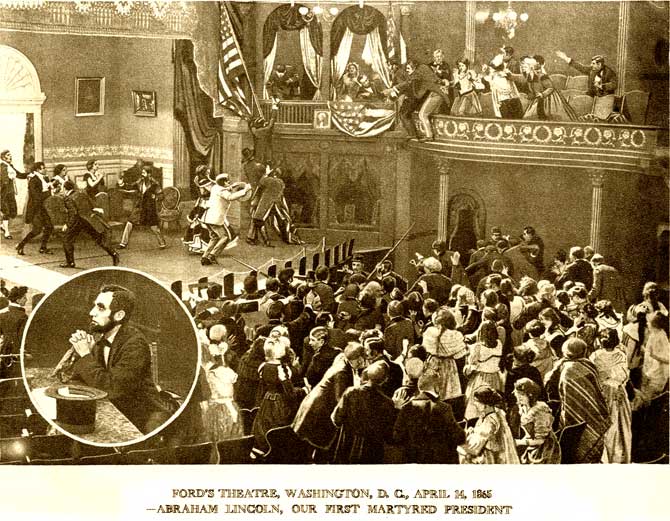 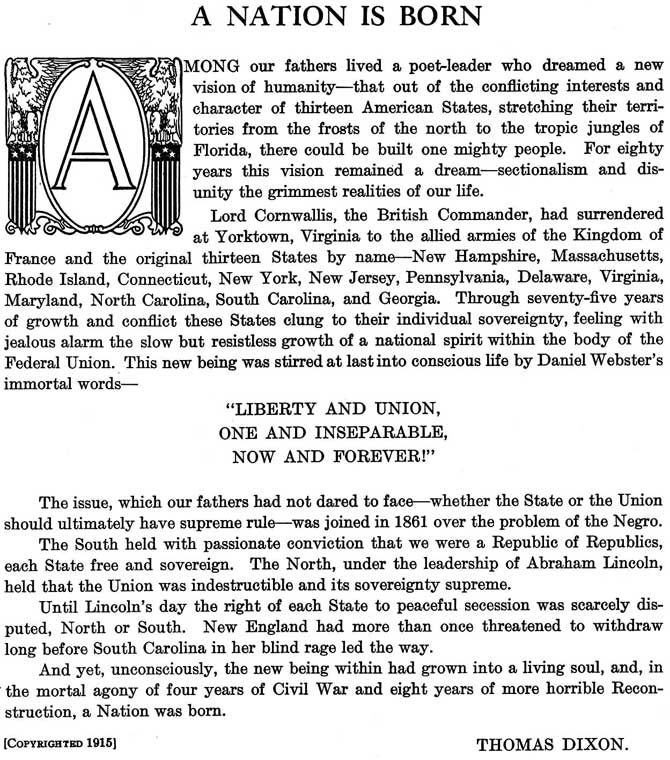 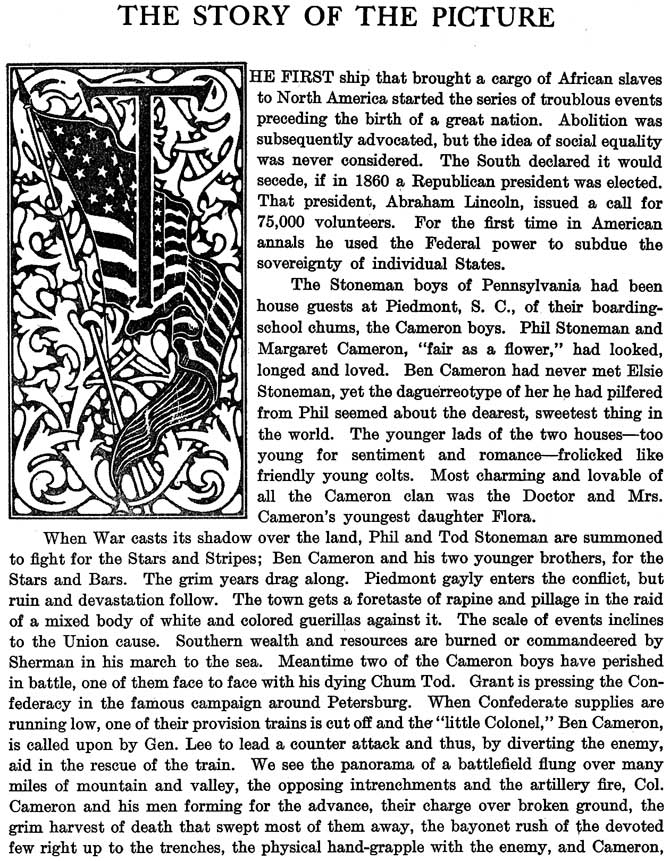 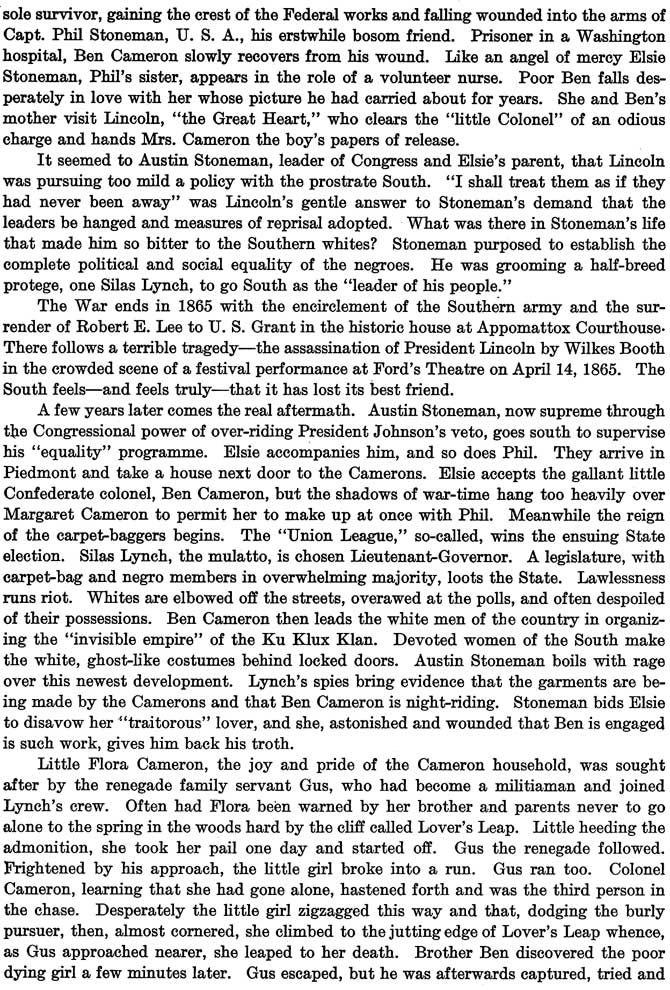 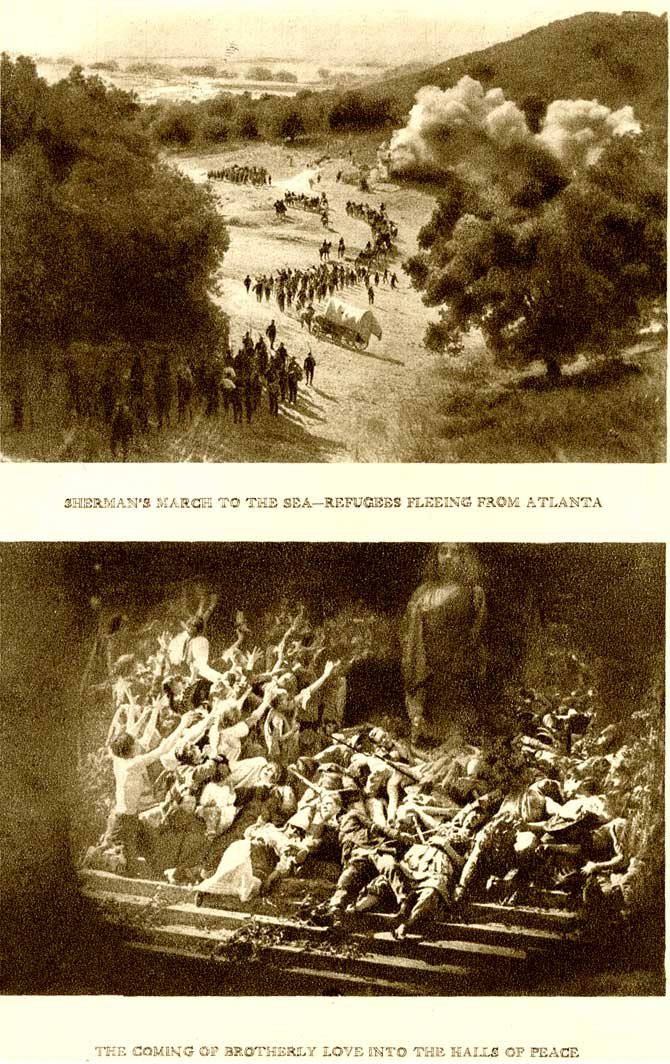 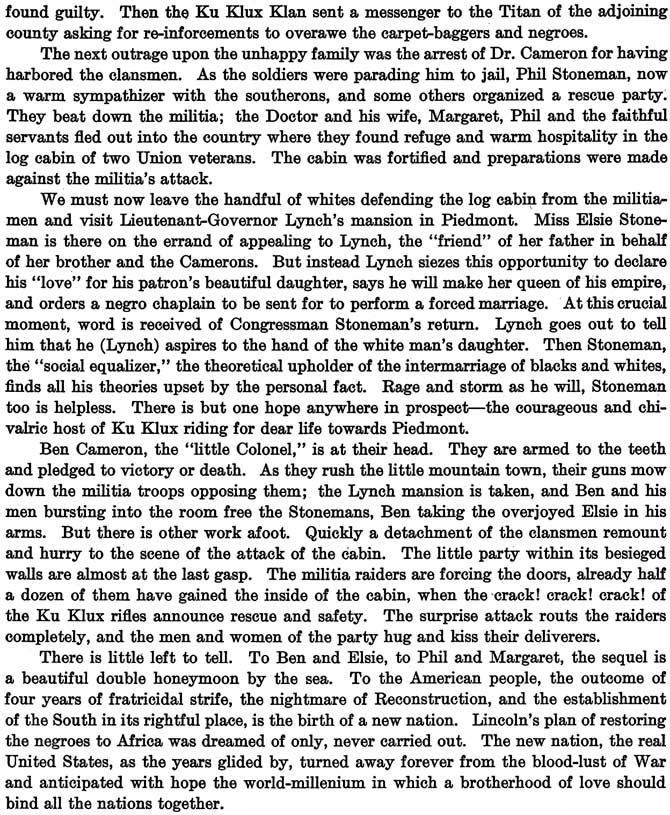 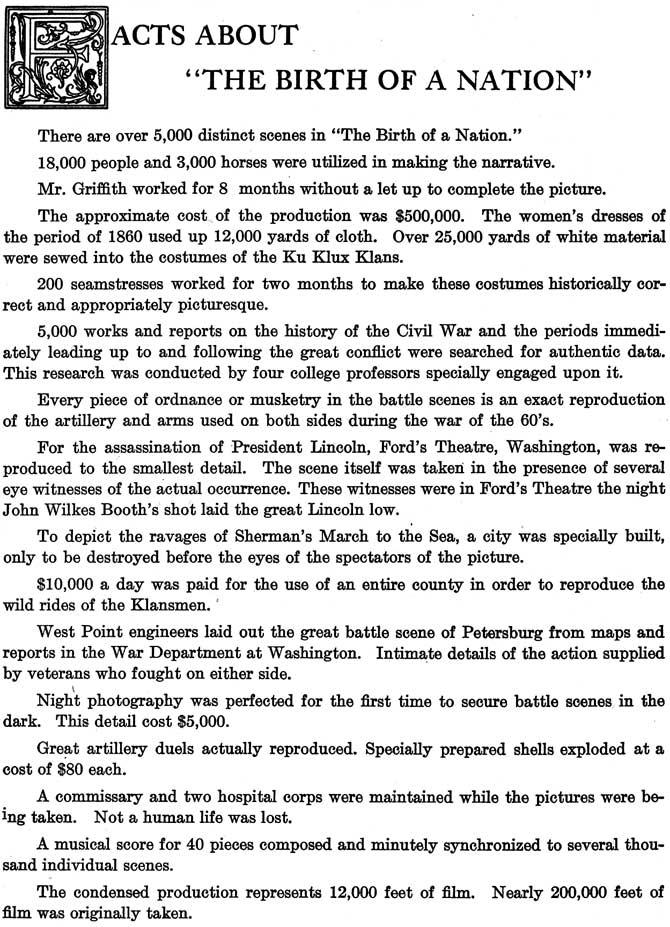 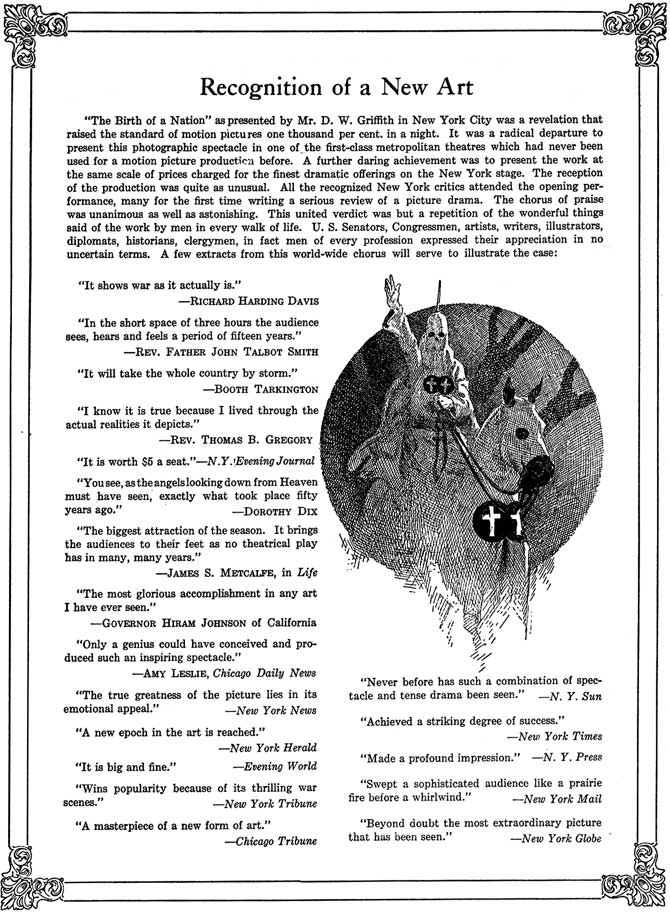 The Birth of a Nation is one of the most influential and controversial films in the history of cinema. It is set during the American Civil War and is directed by D.W. Griffith (January 22, 1875 – July 23, 1948) and was released on February 8, 1915. It is important in film history for its innovative technical achievements and also for its controversial promotion of white supremacism and glorification of the Ku Klux Klan.

The film was originally presented in two parts separated by an intermission. Part 1 depicts pre-Civil War America, introducing two juxtaposed families: the Northern Stonemans, consisting of abolitionist Congressman Austin Stoneman (based on real-life Reconstruction-era Congressman Thaddeus Stevens), his two sons, and his daughter, Elsie, and the Southern Camerons, a family including two daughters (Margaret and Flora) and three sons, most notably Ben.

The Stoneman boys visit the Camerons at their South Carolina estate, a pinnacle of the Old South, and all it represents. The eldest Stoneman boy falls in love with Margaret Cameron, and Ben Cameron idolizes a picture of Elsie Stoneman (Lillian Gish). When the Civil War begins, all of the boys join their respective armies. A black militia (with a white leader) ransacks the Cameron house, attempting to rape all the Cameron women, who are rescued when Confederate soldiers rout the militia. Meanwhile, the youngest Stoneman and two Cameron boys are killed in the war. Ben Cameron is wounded after a heroic battle in which he gains the nickname, “the Little Colonel,” by which he is referred to for the rest of the film. The Little Colonel is taken to a Northern hospital where he meets Elsie, who is working there as a nurse. The war ends and Abraham Lincoln is assassinated at Ford’s Theater, allowing Austin Stoneman and other radical congressmen to “punish” the South for secession with Reconstruction.

Part two begins to depict Reconstruction. Stoneman and his mulatto protege, Silas Lynch, go to South Carolina to personally observe their agenda of empowering Southern blacks via election fraud. Meanwhile, Ben, inspired by observing children pretending to be ghosts to scare off black children, devises a plan to reverse perceived powerlessness of Southern whites by forming the Ku Klux Klan, although his membership in the group angers Elsie.

Then Gus, a murderous former slave with designs on white women, crudely proposes to marry Flora. She flees into the forest, pursued by Gus. Trapped on a precipice, Flora leaps to her death to avoid letting herself be raped. In response, the Klan hunts Gus, lynches him, and leaves his corpse on Lieutenant Governor Silas Lynch’s doorstep. In retaliation, Lynch orders a crackdown on the Klan. The Camerons flee from the black militia and hide out in a small hut, home to two former Union soldiers, who agree to assist their former Southern foes in defending their “Aryan birthright,” according to the caption.

Meanwhile, with Austin Stoneman gone, Lynch tries to force Elsie to marry him. Disguised Klansmen discover her situation and leave to get reinforcements. The Klan, now at full strength, rides to her rescue and takes the opportunity to evict all of the blacks. Simultaneously, Lynch’s militia surrounds and attacks the hut where the Camerons are hiding, but the Klan saves them just in time. Victorious, the Klansmen celebrate in the streets, and the film cuts to the next election where the Klan successfully disenfranchises black voters. The film concludes with a double honeymoon of Phil Stoneman with Margaret Cameron and Ben Cameron with Elsie Stoneman. The final frame shows masses oppressed by a warlike ruler transformed into angelic figures under a Christ-like representation. The final title rhetorically asks: “Dare we dream of a golden day when the bestial War shall rule no more. But instead-the gentle Prince in the Hall of Brotherly Love in the City of Peace.

Griffith agreed to pay Thomas Dixon $10,000 for the rights to his play The Clansman, but ran out of money and could only afford $2,500 of the original option. For the balance, he offered Dixon 25% interest in the picture. Dixon reluctantly agreed, but the film’s unprecedented success made him rich: at the time, Dixon’s proceeds were the largest sum any author received for a motion picture story, amounting to several million dollars.

Griffith’s budget started at $40,000, but the film ultimately cost $110,000 (the equivalent of $2 million in 2006 [citation needed]). As a result, Griffith constantly had to seek new sources of capital for his film. A ticket to the film cost a record $2 USD (the equivalent of $36 in 2006 [citation needed]). However, it remained the most profitable film of all time until it was dethroned by Snow White and the Seven Dwarfs in 1937. West Point engineers provided technical advice on the Civil War battle scenes and provided Griffith with the masses of artillery used in the film. The film premiered on February 8, 1915, at Clune’s Auditorium in downtown Los Angeles.